Here are short excerpts of an article which I found this morning on Magharebia web site.

“Once upon a time, a primary school teacher could easily support his family single-handedly, but that has become very difficult now. The marriage age has risen in Morocco due to the increase in the cost of living. The concept of mutual financial help between spouses is a fairly recent one, especially in urban areas.”

For 33-year-old Farid Laafraoui, the search for a wife has lasted three years. He set a number of criteria that his future spouse must meet, including the need for her to have a job. He told Magharebia that the time when love came before marriage has passed.

“Love is essential, but it is built following marriage on the basis of mutual respect,” he said. “If a couple’s financial situation is stable, they will have fewer problems. My monthly wage is just 5,000 dirhams. A second income will be necessary to run the household and pay for the children to go to school.”

Farid is one of many people who are attributing their focus on women’s financial circumstances to the new demands of daily life. Women are also aware of the change and are placing higher demands on men in return.

Narjiss Bahaoui, a 28-year-old bank clerk, said that several men close to her family and at her workplace had made overtures towards her, but that she preferred someone “ready” to tie the knot.

“Since feelings are not a major criterion for marriage, I have the right to marry a husband who already has a flat and a nice car,” she said. “But despite everything, I’m willing to abandon these preconditions for someone who would love me for myself and not my monthly income. I’m both romantic and realistic at the same time.” 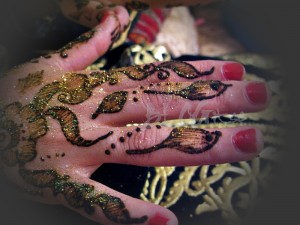 Laaziza celebrated her engagement on Friday.

More pictures and her thoughts about marriage and life in Morocco next week!

Here’s an excerpt of one comment for the article:

“Instead of buying a really nice car, and going out drinking and smoking hash with your friends, if your goal is to get married, SAVE your money!!! Even earning 5000 DH a month, if you are living at home, you can put aside 4500 DH a month!! 4500 X 12 = 54,000 DH!!! There are low cost apartments that are available for 20,000 DH deposits! If you save for 5 years, you would have enough to not only pay off a 50 sq meter apt, but you would have enough to furnish it!!! When you get that out of the way, you then do not have to worry about paying for housing!!! I am not saying it is easy. I am saying it is very doable. Unfortunately, most young men want the easy way out. They want to be able to have extravagent weddings, and drive really nice cars and then marry a working woman. Well, when you marry a working woman, you actually end up needing even MORE MONEY!!! Instead of having just one car, you now need two cars. Instead of paying insurance, garage and storage on one vehicle you now need two, how about child care?”

Do you both work? If yes, why?

Have you noticed life become more expensive in your country, how do you notice that?

How equal women and men are in your country?