A manifestation of women’s resistance and survival in the face of violence,

the historical Soviet occupation of Estonia with human trafficking,

tying the political to personal.

History and love collide in this darkly poetic rhythmic elaboration. 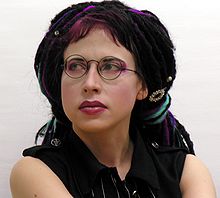 was staged at Finland’s National Theatre in 2007.

Sofi Oksanen was born and raised in Jyväskylä located in Central Finland.

Her father is a  Finnish electrician, her mother an Estonian engineer

who grew up in Estonia during the Soviet period and immigrated

Oksanen studied literature at the Universities

of Jyväskylä and Helsinki and later drama at the Finnish Theatre Academy in Helsinki.

Oksanen is actively involved in public debate in Finland and

comments on current issues in her columns and various talk shows.

She is a self-identified bisexual and has suffered from eating disorders.

activism on behalf of LGBT people in the